Driving Digital: How car dealers can adapt to challenges in 2022

May 12, 2022. Giosg attended the Driving Digital event in London’s Central Hall in Westminster this Thursday. The event started off with a sombre tone and grim projections for the post-pandemic future.

Despite the difficult market situation, there was hope in the air, and at the end of the event attending car dealers were left with a set of tools on how to beat the challenges facing the industry.

Keep reading for our key takeaways from the Driving Digital event.

Big tailwinds in the automotive industry

Car dealers are facing some of the biggest challenges at the moment. On top of the global pandemic - that has had a dramatic impact on the automotive industry - the UK is suffering from hyperinflation. “Consumer confidence is also at an all-time low,” Owen Edwards from automotive business consulting firm Grant Thornton explained.

Supply chain issues, petrol prices, and inflation rates were just some of the few of the things that are disrupting the current market.

“We are entering the most challenging market since lockdown,” Chief Marketing Officer Kim Costello from Pendragon agreed. “The market has been in a stage of constant change,” Costello added.

On top of this, the impact of war is causing raw material shortages from factories in Russia and Ukraine. Many car manufacturers have also halted production and sales in Russia, such as Volvo Trucks and Jaguar Land Rover, Edwards presented.

It will take until 2023-24 before the vehicle as a product will reach pre-pandemic levels again, Edwards estimated in his presentation.

“A lot of factors cause concern”, Ian Plummer from Auto Trader agreed.

But not all is lost. There are ways car dealers can adapt to these changes and rise to the top.

The key to survival is how we can harness and embrace change, Plummer said.

The rise of electric vehicles

According to Ian Plummer from Auto Trader, the three biggest factors causing an overhaul in the automotive industry are the rise of electric cars, change in consumer behaviour, and digitalisation.

The demand for electric cars has increased enormously in recent years. According to Marc Palmer from Auto Trader, electric cars will account for 45% of new car sales by 2025. In 2026, Auto Trader estimates that all cars that are up to one year old will be electric.

The rise of the electric vehicle is caused by spikes in fuel prices and mandates for electric vehicles set by the UK government. One big factor is also the supply. New (electric) cars are launched all the time, said Plummer. This means consumers have more choices in electric cars. “Choice brings new market dynamics,” Palmer stated.

Things have changed very rapidly. Even if there are more brand options for electric cars, it is still quite limited in terms of the models of cars. Most electric cars are still small, expensive and not really best suited for families with kids.

“Only 40,000 cars of all the cars sold in the UK were used electric cars,” Palmer shared.

Even if the demand for electric cars has seen big spikes, there is still work to be done. Many electric car manufacturers could do a better job marketing the benefits of electric vehicles. Electric cars cost more than fuel cars, but the running costs are much cheaper. As a car dealer, you should communicate this to the consumer.

Electric car drivers can save 140£ per 1,000 miles on running costs, Palmer said.

During his presentation titled More than electric dreams, Palmer broke down the type of buyer persona that is interested in electric vehicles.

This is what the electric buyer persona looks like:

🟣 Belongs in the wealthiest social grade.

Surprisingly, whether a person lived near or far from a public electric charging station didn’t really have an impact on the likelihood to buy electric. Most people are charging at home, so it is not a huge issue, Palmer explained.

However, Palmer stated that there are not enough public electric changing stations compared to the rise in the purchase of electric vehicles.

Another interesting point Palmer made is that electric car customers are less brand loyal. The list of best selling electric cars is changing continuously.

Tesla though is on another level than the rest. “Tesla is not in the chart because we wanted to see which traditional brands are moving into the electric vehicle market”, Palmer said. The crowd started laughing when they saw the chart with Tesla included. Tesla was dramatically dominating the charts. 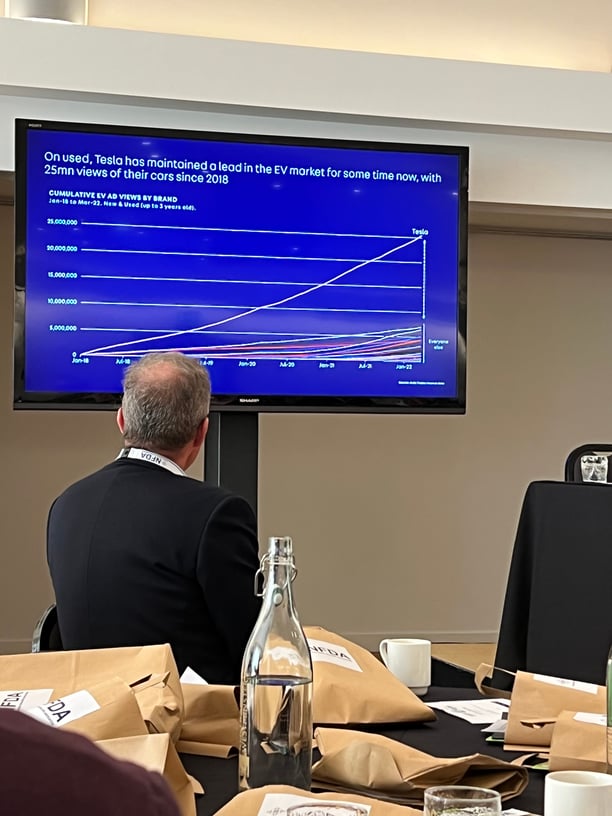 The change in consumer behaviour

Consumers are more and more open to buying online and the UK digital economy is the fastest growing in the world.  Two-thirds of car buyers want to do most of their car buying online, Plummer stated.

Kim Costello from Pendragon added more perspective to this number. She believes that 100% of car buyers start their buying journey online, though most people are not ready to buy fully online yet.

At Driving Digital, an improved customer experience was mentioned as the key to overcoming the challenges that are causing havoc in the industry. Also, improving the reputation of the automotive industry as a trustworthy industry stirred up a conversation during the event.

Brand trust is even more important when you are selling online, Plummer stated. You have to give the consumer a worry-free online experience.

The customers want choices and better delivery options.  “Give them (the consumer) what they want.”

Costello agreed, highlighting the importance of having the right interactions at the right time with the consumer.

Costello believes that car dealers must listen to consumers. Some car dealers are forcing consumers down the digital path, but most consumers are not ready to buy completely online.

Dealers should look towards a hybrid model, where the car buying journey happens partly online. This is what most consumers want, according to Costello.

Another thing Costello mentioned was that customers want personalised experiences but they don’t want to give away their data. This highlights the importance of first-party data.

UK customers are also starting to demand more customer-centric buying experiences, Costello said. In the US this has been the case already before.

You have to meet the customer where they are in the buying journey, she added.

“Our data shows manners maketh fans. People want to still buy from people,” Neil Addley from Judge Service summed this idea up in his presentation.

The way of the Dodo and the power of upselling

After some data-heavy sessions, Neil Addley from Judge Service woke up the crowd with a toy dodo. He explained that the dodo died because it couldn’t adapt to the new environment with different predators and more limited resources. This will also happen to those automotive companies who are not able to change their strategy in this new challenging marketplace.

Addley also stated that customers actually love when salespeople upsell products to them.

Findings from the best car dealerships in digitalisation

He gave some impressive numbers on Arnold Clark’s digital sales in the last two years. When in 2020, 70% of customers interact with Arnold Clark digitally, and that number had gone up to 90% in 2021.

“Digitalisation has driven our profitability,” he stated.

Some impressive figures from Arnold Clark:

Arnold Clark is impressive with its digital services. A customer can have virtual car tours, make online bookings, check out online, use click and collect service, and get an electric vehicle health check all online. Arnold Clark also has a successful app that is actively used by many of their customers.

“The digital journey is here to stay, and customers want that,” Hawthorne concluded.

Car dealers have to adapt to the new market environment by listening to the consumers, being more digitally savvy and building trust in their brand. There is potential for huge gains despite challenges, as long you don’t repeat what the dodo did: which was absolutely nothing in a changing environment.

If you wish to read more about the digitalisation of the automotive industry, check out the data from our Car Trend 2022 survey.